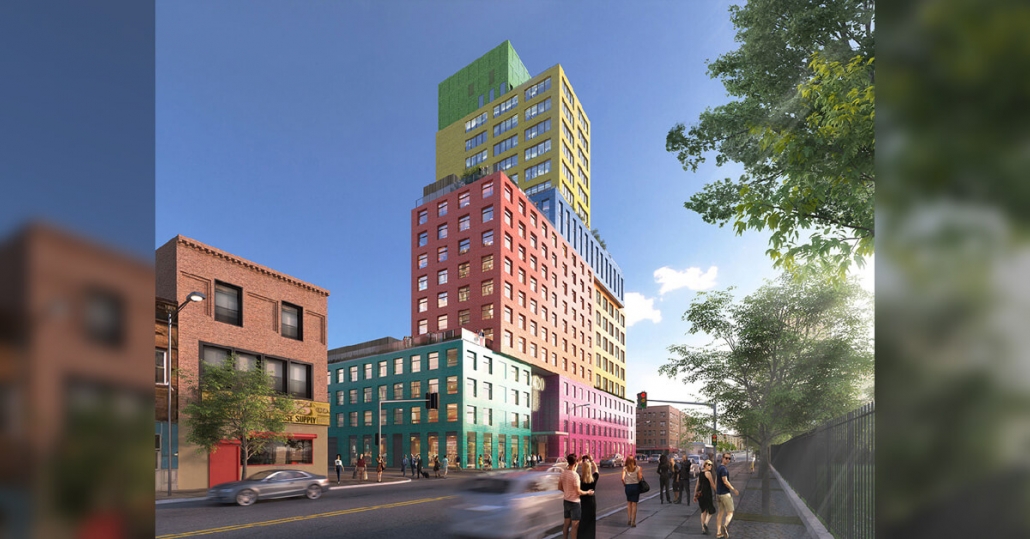 This summer, the critically acclaimed film In the Heights presented the rich history and culture of Washington Heights. The neighborhood is also known for its great food and easy access to parks, but not for luxury living or as a hotbed of retail and hospitality. However, developer Youngwoo & Associates is undaunted. Radio.181, a ground up mixed-use tower located at 2420 Amsterdam Avenue (on the corner of West 181st Street) is winding down construction, as photos from general contractor Rinaldi Group show.

At over 260 feet high, Radio.181 (previously known as Radio Tower & Hotel) is one of the tallest buildings in Washington Heights. Architect of record Stonehill and Taylor describes the project as a 221-room hotel within an L-shaped mid-rise structure connected with a 22-story commercial office building. The design by Dutch architecture firm MVRDV deconstructs a typical Washington Heights block, reassembles it vertically, and incorporates building colors like those found in the neighborhood.

The building is set back from 181st Street to provide a landscaped hotel arrival, which will flow seamlessly into a central courtyard. Workshop/APD is the interior designer, and early renderings show rooms and a lobby that would be right at home in a hip downtown hotel

The office component of Radio.181 will comprise 20 floors and 149,526 square feet of Class A office space. According to marketing materials from Loopnet, the spaces will feature ceilings from 12 to 17 feet high, flexible floor plates, and windows on three sides. Availability is estimated to start in September 2021.

In addition to the hotel and offices, Radio.181 will bring 8,000 square feet of corner retail space, 8,800 square feet of event and meeting facilities with outdoor terraces, and two rooftop restaurants and bars to the neighborhood. It will also offer underground parking, but the office marketing materials cite its excellent proximity to the 181st Street 1 and A trains, the George Washington Bridge, and seven bus lines.

Read more from City Realty….More details about this project here…