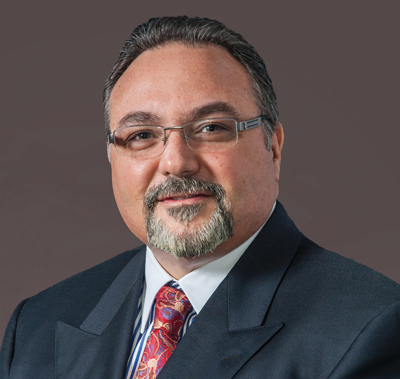 Rinaldi was born in Elizabeth, New Jersey, and he is the only child and son of the late Anthony T. Rinaldi, II, a highly decorated and hall of fame police captain and 30-year veteran of the Hoboken Police Department, Hoboken, New Jersey and Mary Rinaldi, nee Visaggio, an amateur bowling champion who competed throughout Hudson County, New Jersey, and who is also a hall of fame amateur bowler who’s stature has been immortalized in the National Bowling Museum & Hall of Fame, located in St. Louis, Missouri.  Rinaldi’s father was a World War II veteran and Seabee, a member of the United States Navy Construction Battalion with the word “Seabee” coming from the initials “CB”.  He was a significant figure in Rinaldi’s life and bloodline of construction, although he died when Rinaldi was only 19 and a freshman in college.

Rinaldi attended Secaucus High School in Secaucus, New Jersey and was a K-12 graduate of the Secaucus Public School System, where he excelled both academically as well as athletically.  Having graduated with honors and a 3.4 out of 4.0 GPA (A-) and named to the Star Ledger’s 1st-Team All-State Honors in 1983, he was named twice to Who’s Who Among American High School Students both in 1981-82 and in 1982-83.  Rinaldi received numerous athletic scholarships to play college baseball and was considered one of the top professional catching prospects in the nation, landing tryouts with the then California Angels, the Los Angeles Dodgers and the Cleveland Indians.  Given the strict upbringing and influence of his father, Rinaldi chose the path of college and an engineering degree first, over a professional career in baseball, an opportunity that would not come again with the passing of his father and his having to work to support both himself and his mother.

In 1983 Rinaldi accepted a scholarship1 to play Division I baseball at Lehigh University, Bethlehem, Pennsylvania, where he majored in Mechanical Engineering and he received his Bachelor of Science in Mechanical Engineering in 1988, having taken time away from college when his father passed of colon cancer in 1984, just after Rinaldi and Lehigh came off of one of the university’s most successful baseball seasons in the school’s history, winning the ECC (East Coast Conference) division and just missing a trip to Omaha, Nebraska to compete in the College World Series.  In his sophomore year following his passing, Rinaldi dedicated the season to his father and was, thereafter, always found wearing a long, black wrist-band midway up the length of his left-forearm.  He proceeded to be one of the nation’s leading hitters that year, finishing #5 in the ECC with a .393 batting average, just under the elusive .400 mark.  In his following two (2) seasons, Rinaldi was named team captain and finished .375 and .354, in his junior and senior seasons, respectively, and was named the team’s Most Valuable Player as a senior in 1987.  Years later, Rinaldi would be honored with the distinction of being named to the Secaucus High School Athletic Hall of Fame in March 2002.

Although Rinaldi had a rather illustrious baseball career at Lehigh, his focus and interest had always been engineering and construction and following his father’s death in 1984, he lost the luxury to pursue a professional career in baseball and remained ever so focused on his professional career as an engineer and builder.  In 1988, Rinaldi turned down offers with Consolidated Rail Corporation2, Hess Corporation3  and First Brands Corporation4 to join HRH Construction, then one of New York City’s and the nation’s largest commercial builders and the construction division of Starrett Corporation, the entity that built the Empire State Building in 1929.  There, he was involved in building several high-profile projects, among them the historical Audubon Ballroom, a venue best known for the assassination site of Malcolm X back on February 21, 1965.

Rinaldi began his high-rise residential career while at HRH, building structures like the 179-Unit, 43-Story Le Grand Palais at 250 E. 54th Street, designed by Fox & Fowle Architects, the 521-Unit, 31-Story Monterey at 175 E. 96th Street for The Related Companies as designed by Costas Kondylis & Associates and the 207-Unit, 20-Story Fordham University Dormitory, Lincoln Center Campus at 113 W. 60th Street designed by SLCE Architects.  Prior to leaving HRH, Rinaldi worked on the $140 million modernization and renovation project at Elmhurst Hospital Center in Queens, New York, although he changed gears between 1994 and 1996, accepting an offer from DeFillips Construction Corporation, a federal and public works construction management firm then owned by two graduates of Lafayette College, which together with Lehigh University forms the nation’s longest standing college rivalry.  It was through that college rivalry or later camaraderie that Rinaldi built his first public school P.S.#22 in Brooklyn, New York, which in part, acted as a catalyst for his next venture into an equity position in his own general construction and construction management firm.

In 1996, Rinaldi was named as Chief Operations Officer of the firm Crain Construction Company located in Jersey City, New Jersey.  Crain had been a company founded by a second generation entrepreneur who had primary interests in the family business, although he had been looking to diversify their portfolio, which did not include construction and development at the time.  The firm had been in business for 2-years with little revenue at the time Rinaldi was named it’s COO.  Between 1996 and 2000, Rinaldi grew the firm into one of the most recognized and revered public works builders throughout New Jersey, maintaining a book of business in excess of $50 million and annual sales over $35 million, and in 2000 Rinaldi was named the firm’s President.  Among the firm’s highlights was it’s prime contractor award on the retail shopping center expansion project for Westfield Design and Development, namely the Garden State Plaza Mall in Paramus, New Jersey, which became at the time, the 9th largest retail shopping center in the nation, and an Honorable Mention Award by the Masonry Institute for the Sharon Road Elementary School in Robbinsville, New Jersey, designed by the Spiezel Architectural Group.  The exterior masonry brick and pre-cast concrete façade was complete with various brick coursing ranging from running-bond to stacked-bond and from soldier-bond to basket-weave with corner corbeling and quoining throughout the building.  On July 6, 1999 Rinaldi received professional recognition by Dun & Bradstreet and was named to the Nationwide Register’s Who’s Who in Executives and Businesses, registered in the Library of Congress, Washington, DC and later that year in October 1999, he was further distinguished locally by being named to the Secaucus High School Alumni Achievement Hall of Fame.

In 2004-05, Rinaldi joined forces with George A. Fuller Company at The Ritz Carlton Renaissance Square, 221 Main Street, White Plains, New York, designed by architects Costas Kondylis & Associates, Harvey Kaufman and Frank Nicholson and on Trump Plaza, 175 Hugeunot Street, New Rochelle, New York, by Lessard Design, both projects forming part of real estate tycoon and developer Louis R. Cappelli and Cappilli Enterprises’ extensive portfolio and body of work.  At the near completion of both projects in 2008, Rinaldi landed contracts with The Red Apple Group and John Catsimatidis, one of New York City’s most prolific billionaire businessmen, entrepreneurs and developers and Ginsberg Development and GDC Properties, Hawthorne, New York, for whom Rinaldi recently completed 220 Water Street, Brooklyn, New York, a 200,000 SF Landmark conversion of the former Hanan & Son Shoe Factory built between 1893 and 1905, creating 135 high-end, luxury rentals in the DUMBO5  section of Brooklyn, New York.  In 2011, the Brooklyn Chamber of Commerce recognized the development and named it as the Multi-family Residential Project of the Year.

Today, Rinaldi maintains a book of business in excess of $750 million, flush with a healthy financial bottom-line and AM Best A rated bonding with Crum & Foster Insurance, Subcontractor Default Insurance or SDI with Lloyds of London and GL/Umbrella with New York Marine Insurance.

Between the years 1997 and 2003, Rinaldi served two 3-year terms as Board of Education Trustee and as the Chairman of the Buildings & Grounds Committee and Co-Chairman of the Technology Committee in the District of Secaucus, County of Hudson, New Jersey.  After his freshman year, Rinaldi was voted Chairman of the Buildings & Grounds Committee 5-years straight by multiple District presidents sitting on both sides of the political aisle, during which time he led the District’s campaigning that ultimately resulted in the passing of a $7 million bond referendum for additions, alterations and MEPS (Mechanical, Electrical, Plumbing & Sprinkler) modernizations of 2-elementary schools, namely Clarendon and Huber Street Elementary School.  Rinaldi and the firm led the design-teams of John Veisz of the architectural firm Faridy, Veisz, Fraytak and Brian Meade of Thomson Meade Vincentsen Consulting, and provided pro-bono value-engineering services and expertise that helped maintain the project’s overall budget by limiting change order extras to less than 1%.

During his tenure in his second term, Rinaldi led a 1-year campaign that once again resulted in the passing of a $14 million bond referendum for the new ground-up construction of a 1,000 seat Performing Arts Center.  Working together again with the design team of John Veisz and Brian Meade, Rinaldi and his firm provided value-engineering re-design services and expertise in assisting the District to finally make the overall project budget after two public bid attempts failed.

Together with his co-chair, the District’s IT Manager & Network Administrator Alvaro E. Vega (today, Rinaldi’s IT Manager & Network Administrator) and the Board Secretary & Treasurer, Rinaldi led the charge of upgrading the District’s antiquated computer systems with over 1,000 new computers, high capacity servers, state-of-the-art software and proprietary administrative system designs utilized by the entire school system across four different buildings throughout the District.

In 2016, Lehigh University inducted Anthony Rinaldi as a Council Member to it’s Engineering Advisory Council (EAC) an external consultative group supporting the dean of the P.C. Rossin College of Engineering and Applied Science. It serves a vital role in linking the college’s strategic objectives and activities with the interests of external constituents and industry groups. The EAC is made up of alumni, professionals and experts who provide strategic guidance to the college across a spectrum of issues and challenge areas. Its members are invaluable sources of knowledge, ideas and contacts, and serve as ambassadors for Lehigh.

In 2017, Anthony Rinaldi was named Chairman to the RLC under the Empire Chapter of the ABC, the nation’s largest merit-shop contractor association standing strong with 22,000 members (companies) across the country, while in the same year, he was named to the Association’s State Board of Directors for the Empire Chapter of New York.  And finally within that same year 2017, his firm, The Rinaldi Group, received the STEP Diamond Award, the ABC’s highest recognition for their safety training evaluation process as a company; and in March 2018, Anthony Rinaldi was honored by the ABC at it’s National Conference in Long Beach, CA, where he received the Beamer of the Year award for recruiting more new members than any other ABC member in the Country.